Home / Birds on a Wire 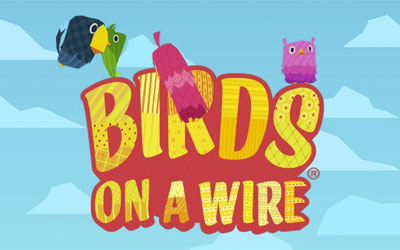 Bird watching will never be the same again!

Birds on a Wire is a 5 reel, 17 payline video slot game developed by Thunderkick. The game has a unique style and gameplay with birds flying onto the reels and landing on three levels of telephone wires, rather than the reels spinning. The game has a dropping symbols feature that allow players to create consecutive wins on a single spin, as well as a free spins bonus round with up to a 20x multiplier.

The game is set in the countryside with rolling hills, trees and a brilliant blue sky behind the reels. Three telephone wires are strung between two telephone poles which stand on either side of the screen. The birds which are the symbols of the game sit on the telephone wires once they have flown onto the screen. There are seven main symbols – different shaped birds in the colours brown, purple, green, light blue, orange, pink and dark blue. The cardboard box with eyes is the bonus symbol and is the key to triggering the bonus feature game. The big black bird is the wild symbol and it substitutes for all other symbols, except the bonus cardboard box symbol, to help create a winning combination.

Landing three or more cardboard box scatter symbols anywhere on the reels will trigger the free spins bonus round. A cat will jump out of the box and scare the birds off the wires and over to the new set of telephone wires on a screen with a pink sky background. Players are initially awarded ten free spins, but will get an extra two free spins for every bonus symbol that appears on the reels, up to 34 free spins. The dropping birds feature is active during the free spins, but during this game each consecutive win will award multiplier values increasing from 4x to 8x to 12x to 20x. On your last free spin, the Inwinity feature will activate, continuing the spinning of the reels until you hit a winning combination.

With a maximum fixed jackpot of 1,000 coins, players will have plenty of reasons to keep playing. Bird watching takes on a whole new meaning when you play Birds on a Wire Slot.