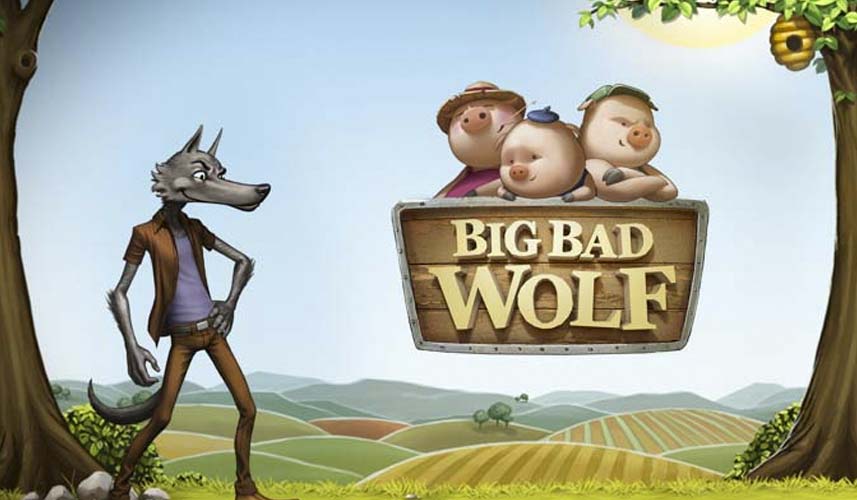 One of the best online slots out there!

Big Bad Wolf Slot was developed by software provider, Quickspin, based on on the tale of The Three Little Pigs. Players are sure to enjoy spinning up their favourite characters from their youth, especially when they see the winning opportunities they provide. The game offers swooping reels for regular wins with a Pigs Turn Wild feature and a Blown Down the House free spins bonus game. There is also a 1,000 coin maximum fixed jackpot to play for.

Blow Down The House!

The 5 reel and 25 payline game has a background of rolling hills with the reels set within the straw house of the first little pig. Anyone who is familiar with the story will appreciate the symbols which include each of the three little pigs, a little pig toy, a moon and high playing card values. The wolf is the scatter symbol and the key to the Blow Down the House free spins game. The beehive is the wild symbol and it substitutes to help create winning combinations.

The Pigs Turn Wild metre is found at the top of the screen where you will see the three little pigs, each with empty circles below them. For each winning combination that is created during the swooping reels, one of these circles will be filled and as the two circles under each pig are filled in, so that pig will turn into a wild symbol on the reels.

Big Bad Wolf Slot is ideal for high rollers with a coin range of between 0.25 and 250.00 coins per spin, although it can be enjoyed by players with smaller bankrolls thanks to the wide betting range. Try it out at IrishLuck and see if you can get the wolf on your side to help you win.