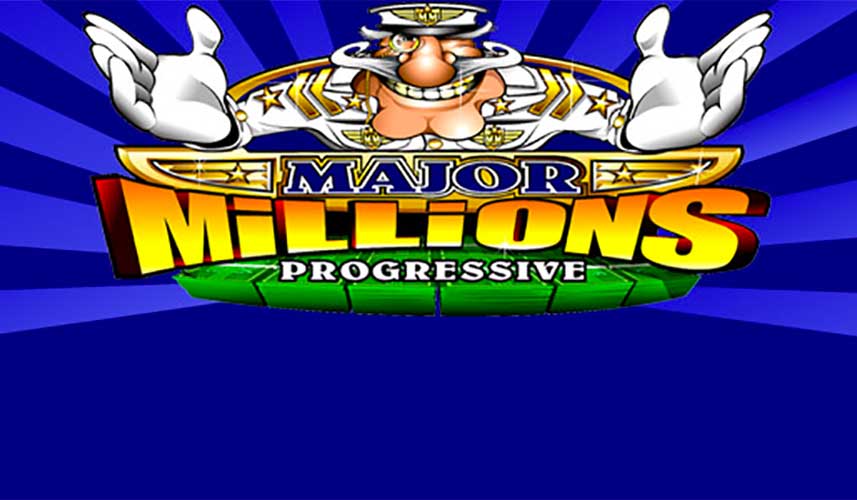 Go for the progressive jackpot in Major Milions!

Major Millions is a 5 reel, 15 payline video slot game with a progressive jackpot, developed by software provider, Microgaming. The game has a military theme with the major overseeing all operations on the reels. There is a scatter symbol and a wild multiplier symbol to increase your chances of winning, as well as the progressive jackpot which can reach impressive levels.

This is one of Microgaming’s older games and it has an older design with the reels taking up almost the entire screen. The five reels are separated so that the blue background can be seen behind and between them. The reels have a white background, making the symbols stand out. These include the major himself, a battleship, a warplane, a tank, top secret letters, medals, the major’s hat, a box of ammunition and field binoculars.

The scatter which is exploding gold coins and diamonds is the scatter symbol and it pays out for three or more landing anywhere on the reels. The Major Millions game logo is the wild symbol. It substitutes for all other symbols, except the scatter symbol, to help complete a winning combination. It is also a multiplier and when it is used to complete a win, it multiplies the win by 3x.

The Major Millions game logo is also the jackpot symbol and when five of these symbols land on the fifteenth payline when you are playing with the maximum bet, it will award the progressive jackpot. The current jackpot level can be viewed in the bar above the reels.

While Major Millions is a simply designed video slot game, it offers crisp modern graphics creating a visually attractive game and the progressive jackpot offers many incentives to keep spinning the reels for the chance of hitting a life-changing win. Go to IrishLuck and play for the chance at hitting an explosive winning payout.